At Symonds-Madison Funeral Home, caring for our fellow comrades in arms and their families is an honor and a privilege. We take care to ensure every veteran receives the honors and benefits they so rightfully earned by serving our country.

Daniel Symonds is a second-generation licensed Funeral Director and U.S. Army Reservist, following in his father’s footsteps of military and funeral service. 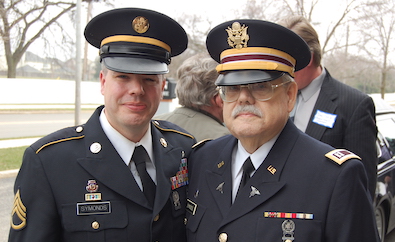 In addition to working in funeral service for his entire life, Daniel has served a total of five tours in Iraq and Afghanistan. He joined the U.S. Army Reserve following the 9/11 terror attacks in 2001.

Daniel has also served his country through training missions around the world, including: Panama, Germany, Korea and Malaysia.

Daniel is proud to have come from a long line of military service, dating back to the Civil War, starting with his Great-Great Grandfather, Private Daniel Rufus Symonds of the Union Army, who he is named after. His family has had a member serve in every major war since the Civil War. 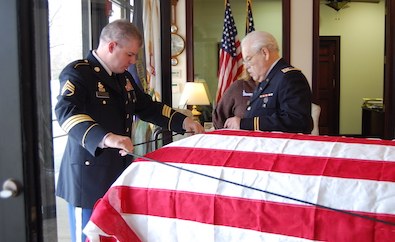 Family lore claimed Daniel Rufus Symonds was a “Boy General” during the Civil War, and Daniel and his father Irving traveled to Washington, D.C. to investigate. They visited the Library of Congress to search military records. There Daniel found Daniel Rufus’ enlistment papers, service cards and discharge paperwork, along with some letters from his great-great grandmother requesting a widow’s pension.

Although the rumors of a generalship were proven unfounded, Daniel did discover his ancestor served with the 20th Maine, Company K, during the Civil War. According to the records, Daniel Rufus Symonds was present for the Confederate surrender at Appomattox Court House in Virginia.

Daniel’s request was granted, and on the 146th Anniversary of General Lee’s surrender, April 9, 2011, Daniel Rufus Symonds was reinterred with military honors (which he never received at his first burial), at Fort Sheridan Cemetery in Highwood, Illinois.

For the occasion, Daniel ordered a set of dress blues for his father, Irving R. Symonds, Jr., who had never owned a pair. The day Daniel presented the blues was one of the few times he had ever seen his father cry.

Irving passed away the following year, in 2012, and is now buried at Fort Sheridan Cemetery next to his son and great grandfather. 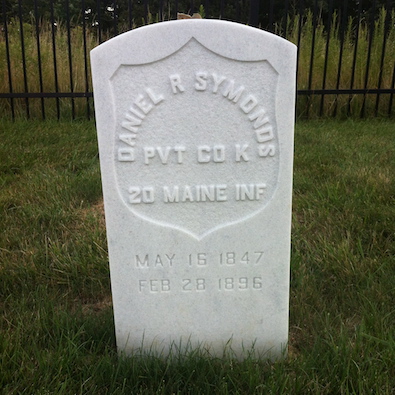 If you need our services immediately, please call us.
We will begin the process of bringing your loved one into our care right away.

The appearance of U.S. Department of Defense (DoD) visual information does not imply or constitute DoD endorsement.

About Us
Our Family
Testimonials
In The News

A year of daily grief support

Our support in your time of need does not end after the funeral services.  Enter your email below to receive a grief support message from us each day for a year.  You can unsubscribe at any time.